Robots are available in a variety of different guises and therefore offer different levels of flexibility, precision, reach and payload. The benefit of this diversity to users is that for most applications, there will be a robot type that is ideally suited to the task in hand. The robot types that currently make up most of the industry sales today are shown below. 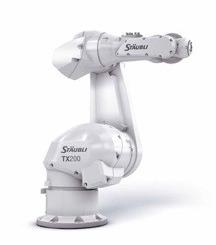 This is probably the most widely used type of robot due to a combination of factors including:

Six axis robots are commonly used for applications such as: MIG & TIG welding, sealing & gluing, machine loading and unloading, part-transfer, and some assembly tasks. This type of robot is also able, depending upon model type, to handle payloads from just a few kilograms up to and in-excess of 2,000kg. 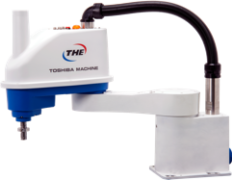 The characteristics of SCARA robots, where they have a level of compliance in the horizontal plane, but are rigid in the vertical plane, make them ideal for assembly applications. This type of robot is also extremely fast, repeatable and accurate, which has enabled SCARA robots to find their way into a wide range of pick and place applications. Although less common than six axis type robots, SCARA robots remain a popular choice for applications various industries, including: electronics and the medical, pharmaceutical and food sectors where cleanroom and wash down versions of these robots are widely used. Typically, they have four joints which includes a linear vertical joint.

There are a wide range of Cartesian type robots, ranging from small X / Y systems, which may be used to perform pick and place applications over a small area, to large gantry robot systems which can span up to 100 metres or more. Cartesian robots can be commonly found performing de-moulding operations on Injection Moulding Machines, where their simple X, Y, Z axis systems are often all that are required to remove parts from the machine and deposit them on to a conveyor.

The rigid construction of cartesian robots, together with their ability to span great distances, makes them the ideal solution to a wide range of applications, including palletising, material handling, machine loading & unloading.  It is also possible to have certain types of cartesian robots fitted with additional axes (fourth, fifth, and sixth) to add greater flexibility, or as seen in the image above, have one or more six-axis robots mounted under the gantry for the ultimate combination of working range and flexibility. Their high rigidity makes them highly accurate and repeatable.

The Delta robot has an unusual configuration, and although they have a shallow rectangular working envelope, they are very fast. With the ability to operate at very high speeds makes them the ideal solution to many applications within the food and packaging sectors, where they are increasingly being used to pick and place lightweight products, such as biscuits, chocolates and cakes – to name a few.

Delta robots gain their speed through the fact that the heavy mechanical parts, such as the motors, are all mounted at the top of the robot on a frame. This means that the main moving  parts are just the light arms and wrist assembly. The limited working range of the delta robot does restrict the number of applications where it is a suitable solution.

Collaborative robots are generally smaller and have a lighter payload capacity than their industrial robot cousins. They incorporate a series of hardware and software safety features, such as integrated collision detection and soft surfaces, to enable them to share the same workspace as the human operator.

Although many collaborative robots look similar in configuration to traditional six axis robots, there are also variants that incorporate two arms to provide additional functionality and flexibility. Some even have cameras and HMI (human machine interface) units incorporated into their structure. 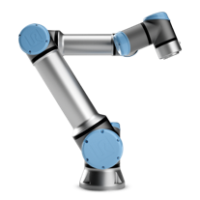 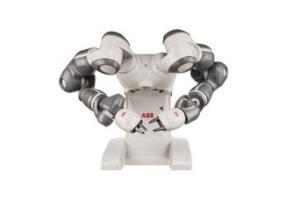 By comparison to other robot types, collaborative robots are still relatively new to industry; therefore, it is not yet certain how many new areas will see the introduction of this type of robot, or indeed whether they will replace other robot types in some applications.

Although many collaborative robots look similar in configuration to traditional six axis robots, there are also variants that incorporate two arms to provide additional functionality and flexibility. Some even have cameras and HMI (human machine interface) units incorporated into their structure.