Collaborative robots, or “Cobots”, as they are often referred to, are not only the latest type to enter the world of industrial automation, but they are being hailed as the tool which can potentially transform the man – machine relationship. Until the introduction of collaborative robots, traditional robots operated in isolation, behind safety guarding or light-guards. There were good reasons for this as many of the applications involved the robot moving at high speed and carrying some form of payload, not the environment for interaction with humans. 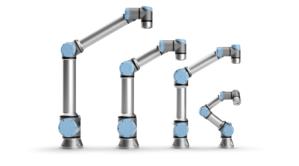 The price of traditional industrial robots, together with integration costs and the issues associated with making the system safe, did mean that many tasks which could potentially be automated or semi-automated, remained as manual operations as the costs involved did not meet the required payback or return on investment, especially for smaller organisations. Collaborative robots are generally: available at a lower total or install cost than traditional industrial robots, designed to be easy to install and program, provide high levels of flexibility and crucially, have the ability to work alongside humans whilst remaining safe.

These attributes alone have made collaborative robots an attractive proposition for many manufacturing organisations, both large and small. The introduction of collaborative robots has opened up a wide range of new applications where the robot is perhaps used to perform the highly repetitive or mundane tasks, leaving the operator to interact where additional human dexterity or decision making is required. This does not mean that collaborative robots can only be used for the simplest of tasks.

By using additional software and hardware options such as machine vision systems and force or torque sensors, this type of robot can be used for complex tasks. There will of course always be a balance between the functionality and capability of the robot and cost, so careful consideration needs to be given to the decision making process on whether to buy a collaborative robot, a traditional industrial robot or indeed some other form of automation.

The Question of Guarding?

For many, the term ‘collaborative robot’ is read as meaning: No Guarding and No Risk Assessment. This is not true. For installations where human operators may interact with machinery of any sort, careful consideration needs to be given to risk and safety. Following an appropriate and rigorous risk assessment, there will be many tasks where a collaborative robot and human operator can work together safely and efficiently, sharing the same workspace, by using the collaborative robot’s own safety features, which typically include the ability to restrict movement, force and speed. 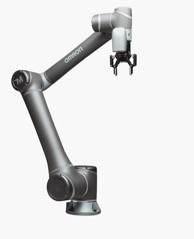 By contrast, there will also be many instances where the integration of an end effector, gripper or indeed the payload being carried by the robot means that the application cannot be considered collaborative. In cases such as this some level of safety guarding, safety pressure mats or light-guards will be required to meet risk assessment criteria. The other benefits of a collaborative robot, such as the ease of installation and programming remain and can make a valuable contribution to the overall project justification.

Where Can I Use Collaborative Robots?

Collaborative robots are generally smaller than what might be considered as the entry level range of conventional industrial robots. The payload of a collaborative robot will be generally around 10kg, however newer models are emerging with greater payload capability, up to 15kg. They also move more slowly than their industrial cousins, so not suited to applications where high speed is essential. However, if operating within their design parameters, and having carried out the appropriate risk assessments, collaborative robots can be used in a multitude of part-transfer, pick and place, machine tending and simple assembly tasks. 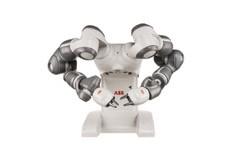 Whilst smaller and lighter than traditional industrial robots, they do have a track record of being reliable, having been thoroughly tested by their manufacturers to industrial standards. Collaborative robots, numbering thousands, are already installed within the food and automotive sectors, demanding environments where the highest levels of reliability are expected.

Overall, collaborative robots can offer a wide variety of benefits to the end user including:

However, to fully realise the benefits which collaborative robots can bring, end users must consider many factors, including assessing the risk to human safety and considering the speed and weight requirements of the application. If the application itself does not allow for the benefits to be fully realised, then a more traditional type of automation may be worthy of consideration.